….  is a meeting between two very active serial collaborators from UK and Denmark. Chalmers is looping tapes scavenged from the landfill of time and makes trance meditations on the Swarmandal and using electronics. Poulsen concentrates on bowed cymbal, toy synth, effects and field recordings.

Latest release by the duo is “Blue thirty-six”, released 1. october 2020 by Blue Tapes. Culled from live sets in Leeds and Bradford in Oct 2019, hammered and tacked together out of bits of swarmandal, tape loops and Casio SK-1, these improvisations somehow transcend their component parts, feeling immersive, 3D and full of gleaming alien intelligence.

As a counterblast to the gently unfolding long-form narratives of the two first albums, these new pieces are short, eccentric, and sometimes jarring. They scuttle around the listener and claw and then, when least expected, swell to unimaginable proportions and eat you whole.

Fictions in the Age of Reason tape and CD, Aphelion Editions 014, november 2019

“Quite a surprise; a pleasant surprise at that. They call this ‘fifth world’ music, which is, of course, a bunch towards Brian Eno and Jon Hassell’s ‘fourth world’ music, which the latter described as “a unified primitive/futuristic sound combining features of world ethnic styles with advanced electronic techniques”. “Fictions” reviewed in Vital Weekly 1215 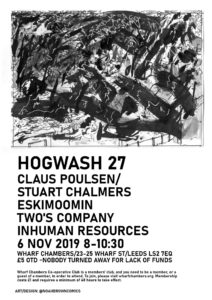